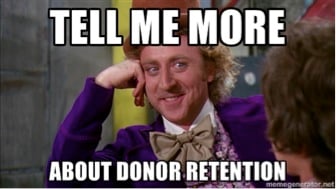 We’re being bombarded with facts, figures and tips to keep your donors coming back to donate month after month. The topic gets so repetitive that, if you’re like me, you start to skip over the articles that have the word “retention” or any of its synonyms in the title.

But, the truth is, donor retention is extremely important, especially if you’re a nonprofit organization with limited funds. Since we can’t avoid the topic, we may as well learn more about it. If you can’t beat ‘em, join ‘em, right?

So, what is donor retention? Simply put, donor retention is the measure of how many people continu
e to donate to your organization. These are loyal supporters who donate yearly.

Why are these donors so much more important than new donors? Most nonprofits don’t have bottomless budgets. That said, it’s actually more cost-effective for an organization to retain the donors they already have rather than putting forth the extra marketing effort and dollars to find new donors. According to an article in Nonprofit Quarterly, it often costs an organization around five times as much to acquire a new donor as it does to retain an existing one. As organizations are receiving less and less government funding, it is increasingly important to keep those loyal donors. Those small, but consistent, gifts add up and it’s important to have donors who you can count on year after year.

How do I get some of these elusive “retained donors”? According to the 2014 Fundraising Effectiveness Survey Report, a report measuring annual growth put out annually by the Fundraising Effectiveness Project, donor retention in 2013 was 43 percent. That is, only 43 percent of 2012 donors made a donation in 2013. So, where did the other 57 percent go? It’s likely that the lost donors found something else to donate to, often because the organization did not put forth the effort to make them want to make a repeat donation the next year.

There are many theories out there about how best to retain donors, but Richard Male & Associates put together a comprehensive list that sums up many of the tactics that most find effective. These include:

What are some donor retention tactics that you use? Why do you think it is so important to foster donor loyalty? Let us know!